In the latter part of the 18th century, the Quaker Nathaniel Ellicott purchased what remained of the original iron works complex established by John Ballendine in the 1750s and converted it to milling operations. His main, or Merchants Mill, was advanced for the time, and may have been the first automated gristmill in the young United States of America. The main mill continued to be used in one fashion or another until 1924, when a generator fire in the Occoquan Electric Light and Power Company destroyed the main structure. Although the small attached Mill House, where the mill’s administrator worked, remained unscathed, decades of subsequent neglect led to its near collapse.

Eventually, the Alexandria Water Company purchased the Mill House in the middle of the 20th century when it began construction of the Occoquan dams. First restoring it for use as office space, the company’s successor, the Fairfax Water Authority (now known as Fairfax Water) eventually turned the structure over to the Town of Occoquan, who leases it to the Occoquan Historical Society for use as a museum.

Former Occoquan Town Council Member Dr. James Walbert designed and handcrafted the model shown above of Occoquan’s 18th century Merchants’ Mill. Dr. Walbert used old photographs and drawings of the mill to guide his efforts. The scale is 1/4 inch = 1 foot. On December 8, 2011, Dr. Walbert presented the model to the Occoquan Historical Society, where it is displayed in the Mill House Museum. 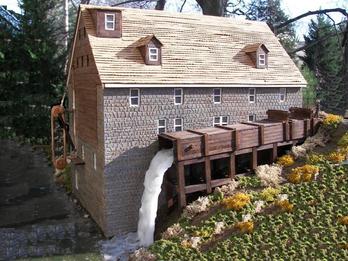